Rose Cottage
Ver todos os detalhes
Limpeza
9,9
Conforto
9,8
Comodidades
10,0
Comida
10,0
Localização
9,4
Nota geral 9,6 Excelente
538 avaliações
Todos
Limpeza
9,9
Conforto
9,8
Comodidades
10,0
Comida
10,0
Localização
9,4
Limpeza
10,0
Conforto
9,9
Localização
9,4
Serviços
9,8
Pessoal
9,8
Limpeza
10,0
Conforto
10,0
Comodidades
10,0
Comida
10,0
Localização
8,6
Limpeza
9,9
Conforto
9,7
Localização
9,4
Serviços
9,8
Pessoal
9,6
Limpeza
10,0
Conforto
9,8
Comodidades
10,0
Localização
9,4
Nota geral
10,0
Limpeza
9,8
Conforto
9,7
Localização
9,3
Nota geral
10,0
Serviços
9,7
Limpeza
9,9
Conforto
9,8
Localização
9,3
Serviços
9,7
Pessoal
9,7
Excelente 10,0
Prós: Everything was super, the room was beautiful and spacious, with a big bathroom. The breakfast was excellent. Big up to the giant bed. Very comfortable. Dan the owner is adorable.
Excelente 10,0
Prós: Everything. Best B&B we have stayed in in Ireland. So much attention to detail. Beautiful place. Our room had a seating area outside too, with a gorgeous view. We were really impressed. Thank you Dan.
Contras: Absolutely nothing
Excelente 10,0
Prós: Everything about the place was 1st class - The hosts, The Rooms, The location (Stunning) and the Continental breakfast was consistently excellent every day.
Excelente 10,0
Prós: Dan and Dominique are lovely hosts. I love to see and hear the river running past. Amazing park and river walks. The food is amazing. The accommodation is very pretty and comfortable. Will come again if in this area
Contras: Nothing
Excelente 10,0
Prós: I was absolutely stunned with the Breakfast cupboard! It was amazing! Literally Everything you can think of was there! And I could not wait until I will make my morning coffee with the croissant and yogurt and cheese and salami and cookies and enjoy it all from my bed with the excellent view to the greenery. Unfortunately I slept over and find myself in a rush to the airport. The owner was absolutely fantastic, helped me with my suitcase, ordered taxi and knocked the door in the morning to make me jump out of my bed and hurry to the airport even without the shower!!! This place is simply Fantastic and deserve the highest rates possible! Would love to come back again. Thank you so much !
Contras: everything is perfect here!
Excelente 10,0
Prós: Friendly staff, very beautiful layout and lovely garden with two cute dogs. Lovely area with a great park next to it
Excelente 9,6
Excelente 10,0
Excelente 10,0
Excelente 10,0
Prós: I booked this stay as a need to stay somewhere last year (In 2017) but quickly changed my view when I saw how amazing this cottage is! My friend and I were greeted immediately and before talking Business was offered tea, coffee, or champagne. After receiving the tea, he sat down with us and outlined all the restaurants and bars in the area to try and ones to stay away from since it was a holiday. On top of the holiday there was a rugby match going on so it would have been hard to find a place to sit down and eat or have a beer. I was very satisfied with my service and given the opportunity to stay in Dublin again I would choose this in a heartbeat. Thank you rose cottage!!!
Contras: There was nothing in control of the cottage that was in satisfied with the weather is another comment.
Excelente 9,7
Prós: Our host, Dan, exlemplified the term. This was our first day in Ireland, and we felt utterly lost. Dan reached out to us before our plane even left home, asking when he might expect us. We had an email dialog that helped us use the public transportation system to reach the B&B. He let us drop our luggage off and explore Dublin while waiting for check-in time, then showed us the best bus routes to take. In the morning, he cooked up a great Irish breakfast for us to get our day started. About the bed, we took it for granted. It was a nice, comfortable mattress, which we wished we had for the next two weeks. It seems comfortable beds are not common in Europe and the UK, so it was a real luxury to have had our first night after a full day of travel at Rose Cottage.
Contras: It is a bit outside of Dublin center, so the bus ride takes about an hour...if there is not a hurling match happening.

1ª posição
Rose Cottage
9,6
Excelente 9,6
538 avaliações
Detalhes
Avaliações
R$ 476
Ver oferta
Crowne Plaza Dublin Airport
Ver todos os detalhes
Limpeza
9,3
Conforto
9,2
Comodidades
8,9
Comida
8,5
Localização
9,0
Nota geral 8,8 Excelente
1.590 avaliações
Todos
Limpeza
9,3
Conforto
9,2
Comodidades
8,9
Comida
8,5
Localização
9,0
Limpeza
9,0
Conforto
9,5
Comodidades
9,0
Localização
9,5
Nota geral
9,3
Limpeza
10,0
Conforto
10,0
Comodidades
10,0
Localização
10,0
Nota geral
9,5
Limpeza
9,2
Conforto
9,1
Localização
8,9
Serviços
8,6
Pessoal
8,8
Limpeza
8,0
Conforto
8,0
Comodidades
6,0
Localização
8,0
Nota geral
8,7
Limpeza
9,3
Conforto
9,3
Localização
9,1
Serviços
9,1
Pessoal
9,1
Limpeza
9,4
Conforto
9,3
Comodidades
9,0
Localização
8,8
Nota geral
10,0
Limpeza
9,2
Conforto
9,1
Comodidades
9,3
Comida
8,5
Localização
8,9
Limpeza
9,1
Conforto
9,0
Localização
8,8
Serviços
8,7
Pessoal
8,7
Ruim 3,0
Prós: Room itself was fine. Location good as close to the airport
Contras: Booked a room with a king bed, around a month in advance, and when we arrived we given a room with 2 single beds with no explanation. We were also basically grilled as to why we were staying in the hotel and made show all our documents to show we are emigrating. If it’s such an issue you should maybe ask for these things before people arrive at the hotel. What if we couldn’t show our documents, would we have been turned away? With a flight to catch at 5am?
Excelente 9,0
Prós: Service
Contras: Nothing
Ruim 1,0
Prós: I came at 10 clock last night to check in as I was just finished work ! Was refused by a grump of a manger, I had my letter from my job, I only stayed here a few weeks back with my letter! I was shocked and hurt by this, and I will bring this up at my staff meeting tomorrow, because at lot of people who would stay here would be for business, iv also put it on face book! I will not stay here again, absolute joke, when I arvied here there was a group of young fellas too drinking and being really loud! Made me looking very silly as I just wanted a place to stay ! But I had to travel all the way home, which I was really tried! I’m very very very hurt by this!
Contras: The manger loved his job to much , made me feel very uncomfortable and made me feel like a no body I’m very hurt by this and won’t ever stay here again ! People on Facebook are shocked with how I was treated !
Excelente 10,0
Prós: We only had an overnight but accommodation was excellent, beds comfortable and detail to cleanliness was first class with hand cleansing opportunities everywhere.
Contras: Although breakfast had quite a good selection. We had a cooked breakfast but it was luke warm. Perhaps if we had been down earlier it might. have been better. It was from 7-10 and we came down at 9.
Bom 7,0
Contras: Evening meal poor
Excelente 8,8
Bom 6,0
Excelente 10,0
Excelente 8,0
Bom 6,8
Excelente 9,4
Prós: Nice airport hotel to stay at night before your flight.
Bom 6,8
Prós: Great loction. It is a airport hotel that is very easily accessible to the city centre. Staff is good
Contras: We did not like that there was hair in the bath tub and all the doors slammed in hallways making it noise at night.
Excelente 10,0
Prós: * Close to the airport * Friendly, very helpful staff * Free airport shuttle bus * Clean, spacious room * Surprisingly excellent dinner * Reasonable rates
Excelente 9,7
Prós: I was very impressed with the breakfast. It included a variety of hot and cold foods, drinks, and excellent service. Staff is very knowledgeable about the different bus routes and different attractions. Very impressed .
Contras: The bed wasn't as comfortable as I would have liked, but I slept fine.
Excelente 10,0
Prós: We had an 11 hour flight layover. The hotel was less than 10 mins from the airport. It was clean and comfortable. This is a nice hotel and definitely fit the bill. A great place to stay
Bom 7,7
Prós: Beautiful hotel, very comfortable, restaurant looked inviting though I was too late to try it.
Contras: Didn't get a lot of help trying to get myself to the airport in the morning.
Excelente 10,0
Prós: The staff was very friendly and helpful. The hotel was very pretty inside and very clean. It was a great bargain and close to the airport. Had some shops close by just in case you needed any necessities.
Contras: N/A 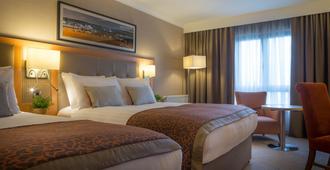 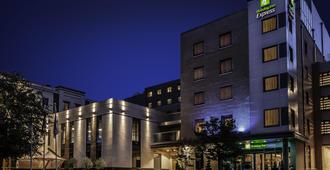 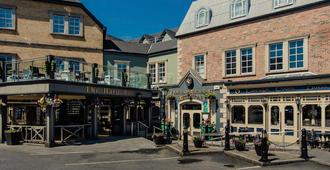 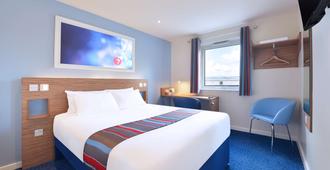 8ª posição
Travelodge Dublin Airport South
7,8
Bom 7,8
1.953 avaliações
Detalhes
Avaliações
R$ 518
Ver oferta
Abbeyglen Cottage
Ver todos os detalhes
Limpeza
10,0
Conforto
10,0
Comodidades
10,0
Localização
10,0
Nota geral
10,0
Nota geral 10,0 Excelente
3 avaliações
Todos
Limpeza
10,0
Conforto
10,0
Comodidades
10,0
Localização
10,0
Nota geral
10,0
Limpeza
10,0
Conforto
10,0
Comodidades
10,0
Localização
10,0
Nota geral
10,0
Excelente 10,0
Prós: Bernadette and Andrew were incredibly sweet and very welcoming. They thought of everything and were very accommodating. Strongly recommend if you like that personal experience and having a place that doesn’t feel so much like a hotel. We sure did!
Excelente 10,0
Prós: Location is very convenient for the Dublin airport and easily walkable to village of Swords. Hosts were very welcoming and gave us valuable information about the surrounding area and suggestions for restaurants and pubs. Accomodations were very nice and comfortable. Breakfast was excellent. We needed to leave prior to the usual breakfast time and the hosts agreed to serve us early. Highly recommend!!
Excelente 10,0
Prós: The hosts provide such amazing personal attention from check-in to a customized breakfast in the morning. Room was clean and comfortable. Great location, only a few minutes from the airport and close to a great pub and shopping center. Will stay here anytime we're in Dublin!