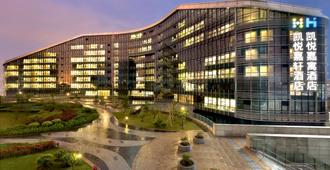 2ª posição
Hyatt Place Shenzhen Airport
8,6
Excelente 8,6
434 avaliações
Detalhes
Avaliações
R$ 588
Ver oferta
Tomorrow Hotel Shenzhen
Ver todos os detalhes
Limpeza
7,7
Conforto
7,8
Localização
7,8
Serviços
7,2
Pessoal
8,2
Nota geral 7,7 Bom
91 avaliações
Todos
Limpeza
7,7
Conforto
7,8
Localização
7,8
Serviços
7,2
Pessoal
8,2
Limpeza
7,5
Conforto
8,0
Localização
8,4
Serviços
7,3
Pessoal
8,0
Limpeza
7,5
Conforto
8,3
Localização
8,6
Serviços
7,2
Pessoal
8,6
Limpeza
7,8
Conforto
7,8
Localização
7,9
Serviços
7,2
Pessoal
9,0
Limpeza
7,7
Conforto
7,7
Localização
7,5
Serviços
7,1
Pessoal
7,9
Limpeza
7,4
Conforto
7,5
Localização
7,5
Serviços
7,0
Pessoal
8,2
Excelente 8,8
Prós: The staff were friendly and kindly enough to help us book a taxi completely free when we missed the airport shuttle
Bom 7,0
Prós: Hotel is a little aged, but clean enough and comfortable enough for a quick overnight business stay. There is lots of shopping within very close walking distance.
Contras: Tiles were cracked, carpet warn and not vacuumed. It is not a fresh, new feeling room.
Excelente 8,0
Prós: The reception staff were very helpful although they spoke very little English, they tried their best to answer my questions about the surrounding areas. The room was clean and spacious and had a great view.
Contras: Nothing
Excelente 10,0
Prós: Clean, fixed non working toilet very quick, good value for money, close to airport by free shuttle
Contras: No English speakers in staff made it difficult to communicate
Ruim 3,8
Prós: Staff counter service level is very good for check-in & out. They also returned items customer left behind (after check out), we went back the next day to retrieval.
Contras: Hardware needs improvement eg no fridge, tv remote volume control not working, aircon not working well, the towel is very rough. Lights along corridor too dim & some blown. Breakfast was salty. Room did not tally with photos shown on the website.
Regular 5,4
Prós: It was close to the airport and provided free pick up. Excellent when the flight arrives at 11pm
Contras: There was no fridge in the room and it was 30+ degrees. Also the room and fixtures had a strong cigarette smell. I book a non smoking room
Excelente 8,3
Prós: Hotel close to Shenzhen Airport (some 3-4km), Shuttle service, Free parking (but crowded), Bathroom is pretty, Hotel Restaurant offers many dishes for similar price as outside. Around hotel is living area with more Restaurants than any other location during my trip (8th Hotel). Staff was kind. There is fruit market and convenience shops nearby, but spotted no supermarket.
Contras: While entering room was very hot (June2019, outside ~35°C)as window left open (same as in colleagues room), couldn't bear. Took me half hour to cool it to acceptable temp. TV remote batteries where empty. The Hotel is good if wanna go airport or visit nearby factories. If want explore Shenzhen and have no car, take some other next subway.
Bom 7,9
Prós: conforto dos Quartos 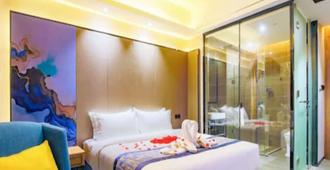 4ª posição
Vienna Hotel Shenzhen Xintian
8,5
Excelente 8,5
6 avaliações
Detalhes
Avaliações
R$ 226
Ver oferta
Sunway Hotel Shenzhen Airport
Ver todos os detalhes
Limpeza
7,2
Conforto
7,3
Comodidades
5,1
Comida
6,5
Localização
7,7
Nota geral 7,4 Bom
188 avaliações
Todos
Limpeza
7,2
Conforto
7,3
Comodidades
5,1
Comida
6,5
Localização
7,7
Limpeza
7,0
Conforto
7,6
Localização
8,3
Serviços
7,1
Pessoal
8,2
Limpeza
7,5
Conforto
7,4
Localização
7,7
Serviços
7,4
Pessoal
8,2
Limpeza
7,1
Conforto
7,3
Comodidades
4,0
Localização
7,9
Nota geral
6,0
Limpeza
7,2
Conforto
7,1
Comodidades
5,7
Comida
6,5
Localização
7,6
Limpeza
7,3
Conforto
7,2
Localização
7,9
Serviços
7,1
Pessoal
7,9
Excelente 9,0
Prós: great room and bathroom set-up
Contras: the food was alway the same, a wide variety could be better for someone staying for 2 weeks
Bom 6,0
My wife, fluent mandarin speaker found it extremely difficult to get there or to find anyone to help. Yes, it was late at night but she really struggled. Once there, was just a brief overnight for an early connecting flight. She gave the ok for the bed.
Excelente 8,0
good
Excelente 8,3
Prós: The location was great for a quick sleep before an early flight. Shuttle to airport was on time!
Contras: Not much to do or eat around it. Found a convenience store
Excelente 8,3
Prós: Close to the airport. Close to the metro station. Nice staff. Priced well for what you get so don’t expect too much.
Bom 6,0
Contras: The complimentary airport shuttle wasn't as pleasant as it should be. The shuttle service isn't run on a regular schedule but instead on a request basis, which requires the guest to call the reception for the service. This is clearly not convenient for any guest who doesn't have Chinese mobile number. Furthermore, the waiting area for the shuttle isn't clearly described - "bus parking lot on the first floor" is just too vague because Shenzhen airport is huge! I think the hotel should immediately take actions to improve on their complimentary airport shuttle for non-Chinese guests - most notably by confirming with the guest prior to arrival if they need the shuttle service and providing as much details as possible on where to meet and who to look out for.
Regular 5,1
Prós: This is an Ok hotel but it is old and it shows it. Food options are not very big for western tastes. No way to know when or where the hotel shuttle will come to the airport, but ok getting you back.
Contras: Food options Wear and tear of the facilities Bed, too hard for western butts Marginal English speaking staff 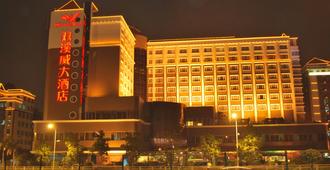 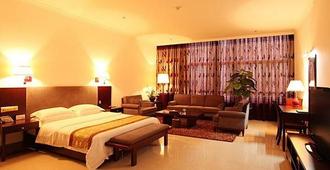 14ª posição
Harmony Hotel
5,6
Regular 5,6
1 avaliações
Detalhes
Avaliações
R$ 238
Ver oferta
Jinjiang Inn Shenzhen Airport
Ver todos os detalhes
Limpeza
6,9
Conforto
6,7
Localização
7,0
Nota geral
8,1
Serviços
6,8
Nota geral 6,1 Bom
224 avaliações
Todos
Limpeza
6,9
Conforto
6,7
Localização
7,0
Nota geral
8,1
Serviços
6,8
Limpeza
7,0
Conforto
7,0
Localização
7,4
Serviços
7,5
Pessoal
7,4
Limpeza
6,7
Conforto
6,5
Localização
6,7
Serviços
6,5
Pessoal
7,4
Limpeza
6,6
Conforto
6,3
Localização
6,8
Serviços
6,4
Pessoal
7,4
Limpeza
7,0
Conforto
6,8
Localização
7,1
Serviços
6,8
Pessoal
7,4
Limpeza
6,8
Conforto
6,6
Localização
6,8
Serviços
6,7
Pessoal
7,3
Excelente 8,0
Prós: The hotel is quite close to airport, located at the old airport site, but only takes about 10-15 minutes in a taxi
Contras: The airport shuttle only goes about every hour. Each time we stay there and call them, the bus only goes on the hour so we end up taking taxi for about 50RMB each time which is OK.. Going back to the airport the next morning is no problem.
Excelente 9,0
Prós: Comfortable hotel not far from the airport, clean and nice. They have shuttle bus to the airport, and also it’s not a problem to go by taxi, like 10-15 min
Contras: The water in the sink didn’t go down the pipe, just stayed there
Excelente 8,0
Prós: Elevator shuttle service to drop off at airport. Elevator
Contras: Lack of English, they couldn't answer Me on the phone. So I couldn't benefit from the free pick up service. Walls are thin, I could hear neighbours.
Excelente 8,3
Prós: Good location for being near the airport
Contras: Not much located around it for food or snacks
Bom 7,0
Prós: The hotel itself is OK, clean and tidy, comfortable place to spend a night in, staff pleasant. They also give you a free shuttle bus to the airport (but not from the airport).
Contras: We have booked this hotel only because it was the closest to the airport according to booking.com when we had a 13hrs layover in China, but it appeared it was 20min drive away! Then we had the worst taxi journey experience. The driver was rudest person ever and pretended he didn't know where the hotel was, so been driving in circles for ages, when we asked him to stop doing it and take us to the hotel he just started shouting at us even though we had a young child with us in the middle of the night. Eventually we were taken to the hotel, but he refused to let us out until we pay ridiculous price for a ride.
Bom 6,0
Prós: The location is good
Contras: The room is small and a bit smelly
Bom 6,0
Prós: Good location, nearby the airport. The location in google maps is wrong. I had some issue to explain it to a chinese taxi driver who doesn't speak english.
Contras: Transfer to airport included in the price.
Regular 4,0
Prós: Checkin staff was nice.
Contras: The walls and windows are very thin, we could hear loud noise from the outside and from the neighbors. It's called airport hotel, but the hotel is on the other side of the runway than the terminal. Therefore, it is about 15-20 minutes by taxi or bus to the airport terminal.
Bom 7,1
Prós: Do transfer ao aeroporto Dos funcionários Da TV e banheiro
Contras: As redondezas, poderia ter mais opções de comida e local mais agradável