Las Hadas By Brisas
Ver todos os detalhes
Serviço
9,6
Localização
9,0
Café da manhã
8,9
Comida
8,2
Wifi
7,9
Nota geral 9,5 Excelente
6.623 avaliações
Todas as avaliações
Serviço
9,6
Localização
9,0
Café da manhã
8,9
Comida
8,2
Wifi
7,9
Praia
8,9
Localização
8,6
Café da manhã
8,1
Serviço
7,9
Comida
7,0
Praia
9,2
Serviço
8,9
Localização
8,9
Café da manhã
8,6
Atmosfera
7,2
Serviço
9,2
Quarto
6,5
Excelente 9,6
Prós: Everytime enjoying this place again
Excelente 10,0
Prós: The location the views and the architecture
Contras: Wish there was a jacuzzi
Excelente 8,0
Prós: The location, restaurant, and pool are all great.
Contras: I have been coming here since 1981. The property is looking a little old. Its time for a facelift.
Excelente 8,0
Prós: Architecture
Contras: Rooms are old.
Ruim 1,0
Prós: The view has great, but the rooms are very far from the lobby and resort area.
Contras: Horrible staff. The front desk were not very helpful and the waiters by the pool area were very rude. A waiter was the worst.
Excelente 9,0
Prós: Good food, great staff and the beach was amazing
Contras: The beach cabannas could have better sun protection, the checkout process was a bit of a mess.
Excelente 10,0
Prós: Wonderful architecture, calm beach.Superb staff. Alpha at front desk so helpful. Marina our fantastic maid is so beautiful, kind and does excellent towel sculptures. Magdaleno at adult pool is attentive. Sandra is a wonderful ambassador for the Las Hadas hotel. Lido our tennis instructor made our holiday with his excellent lessons.. we will be back for more lessons for sure. Senor Luna was everywhere making sure all guests were well taken care of. Eleazar helped our Spanish, Bryan(chef), Frederico, beach staff and hard working gardeners all contributed to making Las Hadas a great holiday.
Contras: all good 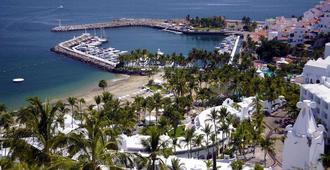 3ª posição
Dolphin Cove Inn
8,2
Excelente 8,2
697 avaliações
Detalhes
Avaliações
R$ 431
Ver oferta
Mar Celeste
Ver todos os detalhes
Localização
8,7
Serviço
7,9
Quarto
7,5
Comida
6,4
Comodidades
4,5
Nota geral 8,2 Excelente
315 avaliações
Todas as avaliações
Localização
8,7
Serviço
7,9
Quarto
7,5
Comida
6,4
Comodidades
4,5
Regular 4,0
Prós: Hotel was throwing a party that went on until 2:30AM. One could not sleep as a result of how loud it was. I complained at the front desk multiple times to no avail. That destroyed what would have been a nice stay. Prime location by the beach but the blatant disregard of the hotel on the guests being able to sleep ruined everything. Will never come back. Also terrible parking.
Bom 7,5
Prós: Service, in general and for room service was excellent. Staff very helpful.
Contras: Jacuzzi did not work. No internet in room although add says " in all areas" Bathroom door would not stay closed. Parking is tight and I was asked to move car twice. Restaurant was very hot.The long thin patio pool needs a railing to stop people from falling off, if sitting on the edge our getting in or out. Problems before arriving processing my credit card. Took two phone calls to clear up problem.
Regular 5,0
Prós: Vista great. Staff very friendly
Contras: Low water pressure. Toilet seat didn’t stay up. Food was mediocre Pool was very hard to get out of. Needs steps and hand rail

5ª posição
Camino Real Manzanillo
8,0
Excelente 8,0
712 avaliações
Detalhes
Avaliações
R$ 562
Ver oferta
Hotel Tenisol
Ver todos os detalhes
Localização
9,1
Serviço
6,9
Piscina
5,9
Quarto
4,3
Limpeza
3,1
Nota geral 7,5 Bom
368 avaliações
Todas as avaliações
Localização
9,1
Serviço
6,9
Piscina
5,9
Quarto
4,3
Limpeza
3,1
Localização
8,9
Serviço
6,6
Piscina
6,1
Quarto
3,4
Limpeza
3,1
Quarto
4,0
Regular 5,8
Prós: nice bed, easy access (if you have a car), and a really good restaurant around the corner (semi-pricey though).
Contras: Rundown facilities. Sanitarian installations obsolete! Leaking water both from toilet and through shower door. Nowhere to hang a wet towel! And the maid left the clean towels right on the toilet seat with the lit open! With my ten years in Mexico, I've never seen that before. Scrambling furniture from other rooms as well as very noisy when toilets from other rooms were flushed. Broken mosquito net. In all not worth the price.
Bom 7,0
Prós: Layout of the premises .excellent pool and restaurant
Contras: We downgraded to a lower level because of no elevator . otherwise could have had a superior suite
Regular 5,0
Prós: Bertha who managed the place & staff were lovely. Nice restaurant Portofino across the pool deck. Location.
Contras: It was obviously once upon a time a wonderful hotel but has not been kept up or updated. The pool didn’t look clean. No lounge chairs. Was just a place to sleep. Needs cleaning & updating badly. It’s unfortunate because it has great bones and a great location but it is not cared for.
Ruim 3,0
Prós: The location is good if you want to visit friends in Club Santiago or if you want to be close to the beautiful Boquita beach. The Ristorante Portofino, located on the premises but a separate business, serves excellent food.
Contras: We should have taken all the negative reviews seriously and stayed away. Since I don't like being too negative, I will simply say that there are no redeeming factors here other than that this hotel is the only one in or near Club Santiago, if that is where you want to be. It feels like an abandoned carcass of a place and is impossible to keep clean. There is construction going on but it is truly beyond any hope of restoration!
Bom 7,9
Prós: The staff was very nice, polite, helpful. The rooms were very clean and the beds very comfortable. The food at the restaurant was very good very convenient to have that at the hotel for when its needed.
Contras: The only issue was one of the rooms that I was given I did not like the location, it was noise and a bit dark going to the room. There was also a smell i could not figure out were it was coming from. The place can use a little updating.
Excelente 8,0
Prós: nice and clean
Bom 6,7
Prós: The room rate per night are really good in relation to the quality. It looks old and even it is clean, it does look like.
Contras: The hotel is mot adecuate for people with movility problems

7ª posição
Hotel Pez Vela
7,7
Bom 7,7
21 avaliações
Detalhes
Avaliações
R$ 278
Ver oferta
Hostal Olas Altas
Ver todos os detalhes
Praia
10,0
Atmosfera
9,0
Localização
8,4
Comida
8,3
Bar
7,7
Nota geral 7,3 Bom
85 avaliações
Todas as avaliações
Praia
10,0
Atmosfera
9,0
Localização
8,4
Comida
8,3
Bar
7,7
Quarto
3,5
Bom 6,3
Prós: The people where super nice and also the beach and the view. A great place to have a party weekend.
Contras: It was very loud in the private rooms form the bar eather you party or you can't sleep ... The bedlinnen was not clean.
Ruim 2,5
Prós: That the beach was supper close.
Contras: This is a bar with rooms upstairs, it is not a hostel. This place host parties until 4 am with big speakers that are so loud. I was not able to sleep, the rooms have walls made out wood and you could hear all the sound from the street and from the speakers, the music was on my ears. Honestly, it hurt so much that I feel like they will bleed. I asked to speak with the manager who was in the so call reception but a soon as he heard manager, he left. I complained to staff and she said that on the website was stated that music was until 2 am. I left so disappointed and I asked another person who is the manager? Which it was same person that I saw in the reception. (White man) I spoke with him, and explained the situation and he said that because it was holly week thet music was until 4 am. I told him that this was so ridicules and the he must mention that on the website. Also, he should stay in my room for one night and see if he can sleep. Moreover, I had bedbug bites in my arms and legs which I also mentioned to the owner and he replied that I wasn’t from his hostel. A staff go into the conversation saying that it was from the beach which I didn't agree. After I was so angry and left conversation with the owner. Later on a staff told me that I leave the premises and I can get the last night money back to which I did. I was supposed to get a nice relaxing vacation and I got nothing of that just the opposite, so disappointed.
Excelente 10,0
Prós: Great place and location
Contras: None
Excelente 8,3
Prós: The location was fantastic and the terrace amazing. Very nice to wake up to the sounds of the waves and walk 10 steps and see some of the most beautiful beach front in the world. The hostel was clean and it had a really cool vibe.
Contras: Can't help being next to the road but the music in the bar was very loud at night. Complimentary ear plugs would be good.
Bom 7,5
Prós: Very basic, but it is a hostel. Very clean, nice staff, some English. No TV phone AC extra. Very dog friendly.
Contras: Be aware, rooms are over a bar, and bars are open until 3am. We mostly slept thru it but if you are a light sleeper, could be issues.
Bom 7,5
Prós: Right on the beach. Friendly staff. Very accommodating.
Contras: Not a very social hostel. Hard to get to from the airport if you dont know how to get there - could have maybe had instructions eg what bus to take etc
Regular 5,0
Prós: The hostel was right on the beach. The room was so clean; the sheets, bathroom, towels. Decorations of the hotel was original.
Contras: The staff were not nice. Especially the women at the reception desk was so cold and rude. So dont expect any smile or a friendly welcome. The rooms of the hostel are located right on the bar, and the walls are made of wood. It was so loud until the bar closes, 2-3 am. The bar owns the chairs on the beach so if you want to stay at the beach you need to keep ordering, even though we are guests of the hostel we were just like a regular costomers from the town. 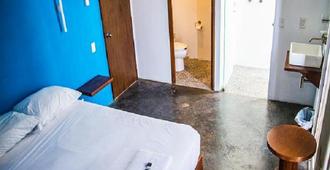