1ª posição
The St. Regis Changsha
8,9
Excelente 8,9
20 avaliações
Detalhes
Avaliações
R$ 1.695
Ver oferta
Changsha Longhua International Hotel
Ver todos os detalhes
Limpeza
9,3
Conforto
9,2
Localização
7,2
Nota geral
10,0
Serviços
9,3
Nota geral 8,8 Excelente
22 avaliações
Todos
Limpeza
9,3
Conforto
9,2
Localização
7,2
Nota geral
10,0
Serviços
9,3
Limpeza
8,8
Conforto
10,0
Localização
7,5
Serviços
10,0
Pessoal
8,8
Limpeza
10,0
Localização
10,0
Nota geral
10,0
Pessoal
10,0
Custo-benefício
10,0
Limpeza
7,5
Conforto
7,5
Localização
7,5
Serviços
7,5
Pessoal
7,5
Limpeza
9,5
Conforto
9,0
Localização
6,5
Serviços
9,5
Pessoal
8,5
Limpeza
9,5
Conforto
9,1
Localização
7,3
Serviços
9,1
Pessoal
8,9
Limpeza
9,6
Conforto
9,0
Localização
7,9
Serviços
9,4
Pessoal
8,8
Excelente 10,0
Good
Excelente 10,0
Prós: Location
Contras: Nothing
Bom 7,1
Prós: Members of staff are very nice and friendly. The buffet dinners were great - the area around doesn’t have any decent restaurants so having meal in the hotel in evenings was really convenient. Breakfast was good too, although ‘cheese platter’ looked a bit pathetic. Also I advised a hotel manager to invest in a proper coffee machine (they only had instant coffee and even tea wasn’t strong enough; I travelled with my own coffee).
Contras: This is my fourth time staying at Longhua. Every year I come I face the same problem: even though I book a non-smoking room (which is nice and spacious) there is still a smell of cigarette smoke coming from somewhere - either window or ventilation system. That’s quite annoying as I’m very sensitive to this smell. But most people might not notice it. The pool is only open in summer :( So even if you have a super hot April-May day you can’t enjoy the pool.
Excelente 8,8
Prós: It was clean and beautiful inside.
Contras: Barley anyone spoke English, even though this listing said the hotel staff spoke Chinese and English.
Excelente 8,8
Prós: Great location and facility, really good service and convenient for transferring from either south station or airport
Contras: Nothing
Excelente 8,3
Prós: The staff were extremely friendly and helpful and the room comfortable. Very comfortable bed and lots of space. my room had a bath which is heaven for me after months of showers.
Contras: The breakfast was disappointing, if you like Chinese breakfasts then I am sure it is fine but they offer a Western breakfast and this is poor. This is not something that is limited to foreign hotels, it is the same in large hotels in the UK. The buffet style service is not suitable for a full English breakfast, the food must be cooked to order. Keeping food on hotplates results in tough bacon, rubbery eggs etc. Here the bacon was kept under a low grill and was tough and crisp; baked beans, tomatoes and fried potatoes were all on hotplates and were luke-warm at best. Fried eggs were also kept on hotplates and had been turned so they were like ice-hockey pucks, cold and rubbery. I asked for two eggs fried 'sunny-side up' but these were produced with a uncooked white and a cold yolk. All it takes is to flip some fat over the white to cook it properly. There were plenty of staff present so it should be possible to cook to order. The swimming pool was not open, the opening dates should be included in the details supplied. The location is too far from the centre, about half-way between the airport and the centre , about a 60 yuan taxi ride each way to either location. It would be good if tea and coffee, if only of the instant kind and milk were provided in the rooms.
Excelente 8,8
Contras: Very difficult to communicate with the staff as hardly any one of them speaks English.
Excelente 8,8
Prós: Hotel looks new
Contras: No takeaway cup for my coffee and coffee had sediments 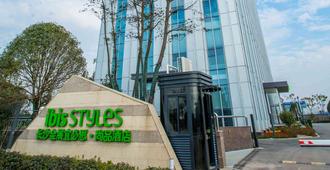 13ª posição
Yannian Shijia Hotel
0,0
Ruim 0,0
0 avaliações
Detalhes
Avaliações
R$ 346
Ver oferta
Changsha ST-Tropez Hotel
Ver todos os detalhes
Limpeza
6,5
Localização
6,5
Nota geral
5,7
Pessoal
5,5
Custo-benefício
5,0
Nota geral 5,8 Regular
4 avaliações
Todos
Limpeza
6,5
Localização
6,5
Nota geral
5,7
Pessoal
5,5
Custo-benefício
5,0
Limpeza
6,6
Localização
6,6
Nota geral
5,6
Pessoal
4,6
Custo-benefício
4,6
Ruim 3,6
For a 5 star hotel, this is well below the average ,definitely not worth the stars given and not worth the money we pay. The staff are lack of traning and give you bad attitute. Room was prepaid, so we stayed two nights only because the hotel is next to exibition hall, with the same price we got a suit on the executive floor at Intercontinental hotel Chang Sha which is 10 times better than this.